Hello all of you…

The biggest debate as of today ,in the sporting world, is the question of whether the Bharat Ratna, the highest civilian award of the country, should be conferred upon Sachin Tendulkar or not.

As you might know, under current scenario,  Bharat Ratna is awarded to personalities for their immense and important contribution in  the fields of politics, arts and science only. Currently there is a demand to add the category of sports to it, so that Sachin Tendulkar can  become eligible for the award. Popular personalities from all across the fields in India are supporting this cause. As a matter of fact, the Facebook group dedicated to the cause of giving Bharat Ratna to Sachin has more then 1,15,000 supporters.

Now I want to put forth my views on this matter. I am saddened to see the support for the cause because the support is for just a single sport Cricket, whereas there are many other sports in India in which many other people have done work worthy of the award. But that does not matter to an average Indian cause as they are concerned with only 1 sport, Cricket.

But even if the only one sport is concerned, why the demand is limited to only Sachin Tendulkar ?

There are many players who have done many better things then him, not saying that Sachin has not done anything. There are 2 main contenders for the Bharat Ratna before Sachin. Lets see them one by one. 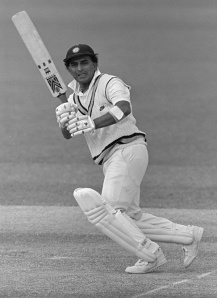 He debuted in 1971 against a rampaging West Indies in their home, and made a name for himself from the start. He made a total of 776 runs in 4 tests with a highest score of 226. He then went on to play many memorable innings including his last innings of 96 against Pakistan in Bangalore, on a square turning pitch.

He was the first batsman in test cricket to reach the peak of 10,000 runs in tests and held the record for the most centuries in test until Sachin Tendulkar broke it in 2005.

He was also a very able captain who captained India to the 1985 World Series title in Australia. He also holds the Indian record for most tests played consecutively (116). 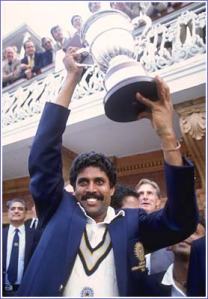 The most capable allrounder India had was Vinoo Mankad who retired in 1959. India had to wait 20 years to get another world class allrounder when Kapil Dev Nikanj debuted for India in 1979 vs Pakistan.
He is the first player and only player to make 5000 runs and take 400 wickets in test cricket. He also held the record for the most wickets in test cricket 434 for a period of 7 years until Courtney Walsh broke it in 2001 against South Africa.

Kapil broke Sir Richard Hadlee`s record of 431 wickets with the wicket of Hashan Tillakratne of Srilanka in 1994 and retired promptly.
But, his biggest accomplishment was, when he captained India to the world cup victory in 1983, upsetting the previous 2 time winners, the West Indies.  He remained the mainstay of Indian pace attack for most of his career, never missing a test due to injury.  Considered to be one of the most influential players in Indian cricket team. He has also coached Team India, during the difficult time of match fixing in 1999-2000.
Kapil is considered as the best all rounder India has produced.

He was also chosen as the Greatest Indian Cricketer of the 20th century by an ICC panel, beating likes of Sachin Tendulkar and Sunil Gavaskar 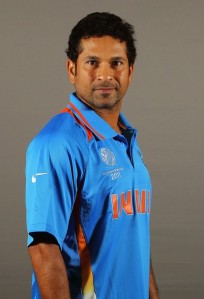 Sachin Tendulkar, a young prodigy made his debut at the age of 16 years against Pakistan in 1989 and now in his 23rd year of cricket, he is still going strong. Almost every person who knows about cricket knows about Sachin Tendulkar, and I am not speaking only in India, I am speaking worldwide.
He is revered as a god of cricket and recently he added the World cup crown to his overflowing achievements on his resume.
Holds the record for the most runs in Test cricket (15837), ODI cricket (18426) , most centuries in international cricket (51 in tests + 49 in Odis = 100), most tests and ODIs played, 198 and 463 respectively and many more records.

Now the situation is this, whenever he steps on to a cricket field for a match, he creates some or other record.

This was just an introduction of the 3 contenders in cricket for Bharat Ratna.
Of these 3 people, I feel that  Kapil Dev should be awarded the Bharat Ratna only because of the impact he made on the Indian cricket. He was the first real fast bowler India got since they started playing cricket. There were days when India played 3 spinners and even Sunil Gavaskar opened the bowling for India.

Bowling mostly on docile pitches in India, he gave his heart and soul for the cause without much support from the other end. He led India to its first World Cup win in 1983, until M.S.Dhoni repeated the feat in 2011.

There are many such reasons that he should be awarded the Bharat Ratna before Sachin Tendulkar. Sachin is still playing cricket and its a foregone conclusion that he would be conferred the prestigious award upon him when he retires, but Kapil Dev`s contribution to the Indian cricket and especially carrying the burden of Indian bowling alone from 1979 till 1987 when Manoj Prabhakar and Chetan Sharma came along.

Now, as far as the first sport person that should be given the Bharat Ratna should be Maj.Dhyan Chand , widely considered the best hockey player of all time. Even Hitler offered him anything if he played for Germany, after seeing his game in the 1936 Berlin Olympics. Read about him Major.Dhyanchand profile . 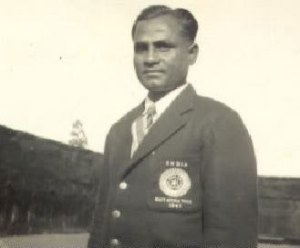 August 29, Chand’s birthday, is celebrated as National Sports Day in India. The President gives away sport-related awards such as the Rajiv Gandhi Khel Ratna, Arjuna Award and Dronacharya Award on this day at the Rashtrapati Bhavan.

As far as I know, he played hockey and made a mark for his country way before India started playing cricket. Maj. Dhyan Chand and other Indian and subcontinent players  made such an  impact on hockey, that the Europeans had to change the rules of the game to suit themselves, in order to stop the Asian influence on the game. Rules like use of artificial pitch instead of ground, penalty regulations etc.
India won 3 Olympic gold medals under him out of a total of 8 medals, which is a record still standing.

He is to hockey what Sir Donald Bradman is to cricket, and it only serves him right and rightfully honors his contributions to the game of hockey that he should get the first Bharat Ratna for sports rather then Sachin Tendulkar.

(UPDATE : It was announced that the Sports ministry of India has nominated the name of Maj.Dhyan Chand for the coveted Bharat Ratna.)

2 thoughts on “Sachin Tendulkar and the saga of Bharat Ratna…”

IPL 2020: List of all the players retained and released by all the 8 franchises